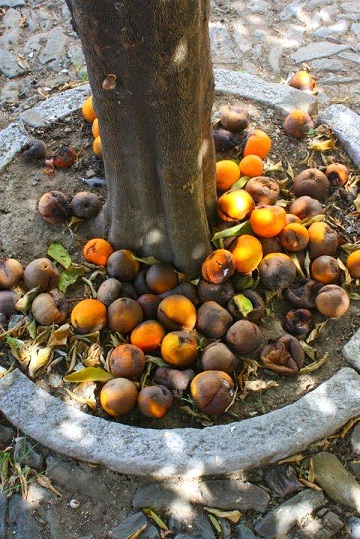 Food waste is a topic that gained growing public and institutional concern in the last decade. Its implications are wide and important, from the ecological, social and economic point of view. First of all, food waste should be considered from a social and ethical point of view. In fact, even though the actual amount of food produced globally would be able to feed the world population two times (Stuart, 2009), still more than one billion of people are starving, while at the same time other people carelessly throw perfectly edible food in the bin.

From an ecological point of view, food waste contributes dramatically to the worsening of the current environmental problems, in terms of pollution and climate change. Food waste in landfill generates GHG-equivalent emissions. More specifically, food waste is responsible for the greatest proportion of GHG emissions of municipal waste, as it often accounts for the largest proportion of solid urban waste (OECD, 2000). Moreover, GHG equivalents are emitted in the production, transport, processing, and storage of all the food products that ends up being wasted. In addition, the ever stopping upward trend of food demand, and consequent need for cultivable land, is increasing the pressure over deforestation, with a consequent harshening of the ecological crises (UNEP 2009, FAO 2011).

Finally, waste represents an economic problem, as resources (such as land, labour, water, and capital) are employed to produce goods with a negative utility for the society (Segré 2010, WRAP 2008). Furthermore, consumers apparently adopt an irrational behaviour: they spend resources to acquire, store, and maybe cook food that they will discard. Additionally, as taxpayers, they are charged with the cost of collecting this wasted food, and recycling it, or sending it to landfill, or incinerating it.

Despite all this, food waste is often not perceived by the contemporary society as a problem. People are still mostly unconscious of the damage they cause, when they throw away food.

In order to increase awareness on the topic, further researches are urgently needed, globally. A common definition, methodology of calculation, and unit of measurement have to be agreed upon at the international level; common strategies have to be designed and implemented within international institutions and States. In addition, a greater transparency should be required throughout the whole food supply chain.

The amount of food wasted in the world is impressive. And still, datasets on food waste are mostly unreliable and incomplete. As the FAO (2011) calculated, roughly 1/3 of all the food produced is wasted. In the EU, the household sector is responsible of about the 42% of all food waste (EC, 2010), corresponding to about 37 million tons per year. The most reliable and complete dataset available in the EU is the one of the UK, thanks to the work of the Waste and Resources Action Program (WRAP). WRAP calculated that in the UK, about the 20% of the food bought is wasted. This means, basically, buying five bags of food to throw one of them right at the exit of the shop, untouched. The overall cost for the society, both in terms of price paid for this food, and of taxes paid for the disposal of this waste, corresponds to about 12 billion of £ per year.

The only available data on Italian consumer food waste are the one provided by the Association for Consumer Defense and Orientation (ADOC), by means of an annual random survey of 1000 household living all over the country.

The Ethical Purchasing Groups (EPG) are informal groups of people gathering together in order to buy food products in bulk, to get access to bio and eco-friendly products at lower prices. Members of EPGs in particular promote a critical approach to food consumption, by allowing members to buy bio and eco-friendly products at an accessible price, and the socialization between producers and consumers; consumption reflects environmental friendly criteria of production, encompassing all the life-cycle of a good, from production till post-consumption disposal.

As WRAP (WRAP 2008) proves, the value each consumer attaches to the food will highly influence its attitude towards waste. The literature on the topic also underlines that an uncontrolled consumer food waste is often a consequence of the lack of a direct link between consumers and producers (Stuart 2009).

A survey was run by means of an online questionnaire, aiming at collecting the same kind of data provided by the ADOC survey. In addition, estimations were asked, about the volume of food waste produced by each household. The questionnaire was online for one month and a half, and the number of households participating was 124, corresponding to 369 people. Half of the interviewed household were living in the North (in the province of Milano), and half in the Centre-South (mainly in the provinces of Siena and Lecce). The questionnaire was organized in three parts, collecting information about the food expenditure levels, the food waste levels, as well as reasons and means of disposal.

The main problem highlighted by this empirical review is the probability that the official available volumes of waste are underestimated. This hypothesis is apparently confirmed by the projections on the Italian national level of the average waste amount produced by households of the analyzed sample.

At a first glance, the empirical investigation based on a sample of households belonging to EPG shows that, at the aggregate level, their food waste behaviour results similar to that reported by ADOC for the average Italian household. However, as previously underlined, average numbers mask important differences at the level of geographic area and household type. The result is strongly affected by the 40% of the sample. In fact, 60% of the household reports a better food waste prevention performance than the ADOC national average.

Further considerations are needed. The EPGs are part of a different, shorter food supply chain, where producers are selected based on ecological, social and ethical criteria. It is important to understand the implication that this choice has on the production of food waste. In fact, food waste can be considered as a failure of the market, inborn in the system. It is not enough to re-equilibrate its negative effects, it is necessary to reduce it before it is created (Segré 2011). Consumer waste, as this study pointed out, is quite relevant within the OECD countries. However, it represents at most one third of total food waste. The remaining two thirds fall under the responsibility of the upper stages of the food supply chain.

It would not be fair, thus, to throw the entire burden on consumers’ shoulders. Choices undertaken at production, processing and especially at retail and distribution level have the power to modify radically the amount of waste produced on the consumer side. As Stuart (2009) explained, big supermarket chains have the tremendous power of pushing the creation of waste up and down the food chain, shifting the burden on consumers and suppliers. These kinds of mechanisms are endemic problems of the system, and need to be addressed by a proper regulation. Whoever wastes has to be held accountable by law. And this kind of mechanisms should be identifies and prevented, by requiring a greater transparency within the system. Without it, no data baseline can be established, and no serious target setting can be done by policy makers.

Nonetheless, consumers still need to get involved and informed. They should acknowledge the magnitude of the problem and the responsibility that each individual has, given the fact that everybody wastes. Overcoming denial is the first fundamental step towards food waste prevention.

(if you wish to get more information on the results of the research, please write to marianna.galantucci@gmail.com)