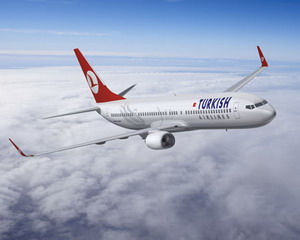 “In March 2012 the world’s 15th-largest airline became the first international carrier in 20 years to fly to Somalia. It is a bold, brave move: the twice-weekly flight, routed from Istanbul through Khartoum has, according to Somali news reports, been diverted at least twice to avoid insurgent gunfire. At a time when many airlines are struggling to stay aloft, Turkish Air is expanding aggressively. It now flies to 98 countries,. more than any other airline.  Since 2003, when Turkey deregulated its airline industry, Turkish has nearly quadrupled its passengers and tripled its aircraft. Its fleet is half the average age (6 1/2 years) of its European competitors. In the first nine months of 2012 Turkish Airlines profit climbed 665%, to about 482 million, on sales of $6,2 billion.

The company certainly benefits from a growing domestic economy and a rise in tourism to Turkey: some 35 million leisure travelers visit the country annually, up from 14 million in 2003. Now CEO Temel Kotil is pushing the airline to capitalize on its advantageous geography ( Istanbul is a 3-to 4 hour flight from many cities in Europe, Asia, and Africa) to turn the airline into a hub carrier for international travel. “We’re Asia and Europe at the same time”, Kotil says.

He is also capitalizing on the woes of European airlines. Hungary’s flagship carrier, Malev, and Spain’s Spanair have gone out of business, while SAS and Air France-KLM, among others, have cut flights.  Turkish Airlines has managed to keep operating costs relatively low with its newer, more fuel-efficient planes and the country’s cheap workforce. Turkey opened bidding for a construction contract to build a third airport in Istanbul, which, according to media reports, will be one of the largest in the world.. Turkish is widely rumored to be in talks with Lufthansa about a joint venture or other alliance. Kotil says his goal is for Turkish to fly 2,000 flights a day, double its current levels (by comparison, United operates 5,000 flights a day).  Kotil sees the expansion of his company as a point of pride for his country: “Istanbul has been one of the major cities in Europe for centuries. In the last century it lost momentum; in the 21st it’s coming back”.