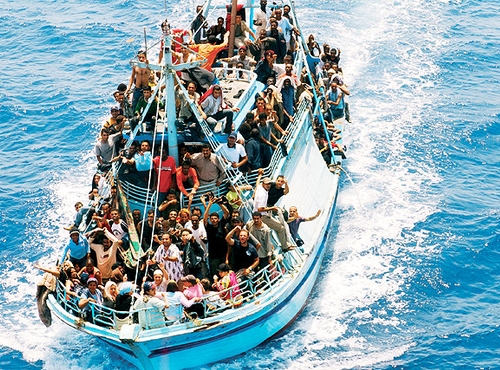 As modern republics go, the Italian one is almost longevous. 65 years is no small feat if compared with the Fourth republic of France, which only lived a dozen years before being wound up in 1958 by general De Gaulle, the founder of the present Fifth republic. The so called Weimar republic of Germany was short-lived too: proclaimed in November 1918, died January 1933, when Adolf Hitler transformed it into the Third Reich: Modern Spain only knew unlucky republics. The  First one lasted three years (1873-76). The Second (the leftist one), born in 1931, was practically dead in the last days of 1938. In 1936 had lost one half of its territory.

Before 1946 a republican government of the whole of Italy never existed (in past centuries a  number of republics flourished in parts of the peninsula; one of them became a glorious empire). Present Italian republic looks poised to stay. However in late March a futile commotion in the House of Deputies, compounded with several political difficulties, so frightened the Italian observers that some of them sort of anticipated a possible demise of the national political system. Newspaper headlines sounded very pessimistic -too many ills, too much turbulence among parties and politicians, an increasing deterioration of the atmosphere.

My opinion is that only a major trauma will jeopardize our cleptocratic regime. The traditional consensus is that an economic catastrophe would be the only logical agent of a constitutional disruption. I believe that a large invasion of migrants from the South of the world could also break the political order.

The encroachment from the Mediterranean can be somewhat managed if it stays in present numbers. Should the prophesies of much larger transfers of populations, the consequences to Italy would be most serious. Our peninsula is overpopulated at 60 millions. Should, say, three millions be added from outside, grave unrests would be likely.

True, Italian employers are perennially eager to import persons from poor countries, as they make inexpensive labor. Since a few years even low-income families are able to employ cheap ‘badanti’ (personal assistants to old people) and housemaids. Janitors and low-grade laborers are predominantly foreign-born. Most menial jobs are currently refused by locals.

In other words: confronted with the moral duty to help the paupers of the world where they live, the Italians (the same as all the rich nations of the planet) answer no. They offer poorly paid jobs to those paupers who succeed in becoming illegal immigrants. Rather than accepting sacrifices (higher taxes), rich people aim to satisfy their own needs at bargain prices. The sufferings and the dangers, problems of the paupers. On April 6 another boat of  African migrants sank in the Mediterranean. 53 survived. 250 (children and women included) lost their life. Such is the ethos of modern advanced societies, the ones who love to teach sermons against backwardness.

But economic circumstances could worsen in Italy. In such a case large segments of the population might no longer afford servants; humble jobs would have to be accepted by formerly fastidious young persons. The general prospects of employment are not encouraging. Italy’s competitive strength is waning. The remedy that many were looking for with expectation -nuclear generation that would lower the energy costs- has disappeared after the Fukushima disaster. The Rome government announced the indefinite postponement of programs to build one or more nuclear plants. As oil will probably become scarcer and more expensive, Italy’s prosperity is due to lessen- an additional reason why Italians will hire less migrants.

The physical features of the Italian peninsula, with a lot of mountains and steep hills, are such that   very little room is available for additional population. Theoretically Italy should shed, say, a million citizens before admitting a million destitute foreigners. This being unconceivable, any large inflow of immigrants will probably provoke a political turmoil serious enough as to pull the republican institutions down.

It would be what Germany, France and Spain did, for different reasons, more than once in modern history.