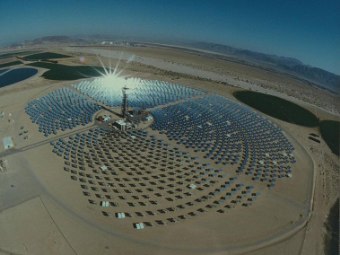 A few months ago The Daily Babel gave me the opportunity to emphasize the vast potential of deserts in terms of solar power, and of course the Sahara is the king of deserts (approximately 9 million sq.km). But one eighth of Asia (with 44,4 million sq.km the largest among the seven parts of the world) is desert. The Tibetan Plateau is the highest and most extended upland of the planet. Consequently Tibet is going to result, after Sahara, a giant “deposit” of solar energy.

The Plateau’s climate is cold (with the exception of the Pomi district, which produces some bananas and grapefruit), a factor that does not favor the production of electricity. However its altitude, between 4,000 and 6,000 meter, is such that the Plateau seems to receive the strongest sunlight of any region of the planet other than Sahara. Add the aridity to altitude. Average rain on the Plateau is between 100 and 200 millimetres per year. Compare that with annual rain in the Indian state of Meghalaya: 12,000 millimetres. Extremely scanty rain means less clouds, therefore a lot of light, i.e. power.

The latitude of Tibet is not northern: a good part of it is not far from the latitudes of Baghdad, Cyprus and Tangier. China, to which Tibet belongs, will be the logical beneficiary of so much potential. It’s developing fast enough to absorb the solar power of the Plateau. Having other deserts, Gobi and Taklamakan in the first place, China shall one day be able to supply its many neighbors that today depend largely for hydro power from rivers fed by retreating glaciers. China will profit by selling solar power to Pakistan, Thailand, Bhutan, Indochina, possibly Japan too.

China is already the world’s most important maker of solar panels and photovoltaic cells. A big emitter of greenhouse gases, the largest nation of Asia has the money to free herself and her neighbors from addiction to fossil fuels. Tibet’s sun is the extraordinary resource which will mitigate the environmental menaces, in addition to give Peking another geopolitical advantage.

Territorial bigness will be decisive even when the mountains are “too many”. Theoretically technology may evolve in ways that allow solar plants on the slopes of high mountains. Even the extremely rugged country of non-flat districts of China will perhaps become prosperous thanks to the photovoltaic panels.

Vast and barren territories of the planet are more value than we used to believe. Will even the roofs of the three thousand monasteries of Tibet be called to fruition?