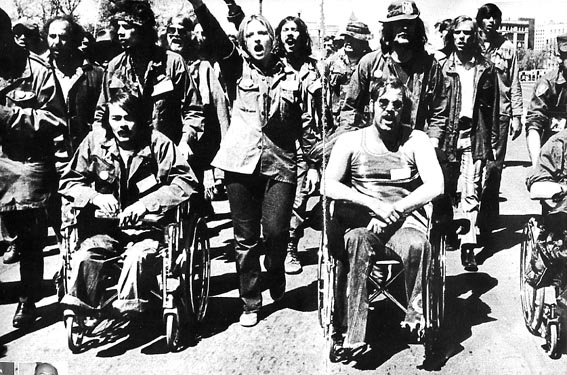 Budget battles and a stagnant economy greet America’s soldiers as they return from Iraq and Afghanistan. Around 800,000 vetertans are jobless, 1.4 m live below yhe poverty line, and one in three homeless adult homeless adult men in American is a veteran. Though the overall unemployment rate among America’s 21m veterans in November (7.4%) was lower than the national rate ((8.6%), for vetetrans of Iraq and Afghanistan it was 11.1%. And for veterans between the ages of 18 and 24, it was a staggering 37.9%, up from 30.4% just a month earlier.

Since so many soldiers lack a college degree, the fact that the recession has been particularly hard on the less educated hits veterans disproportionately. Large numbers of young vetetrans work -or worked- in stricken industries such as manufacturing and construction.  More than 1milion  new veterans are expected to join the civilian labour force over the next four years.

And of course it is also occurring in fiscally straitened times, though it looks as though this will affect veterans’ services less than other parts of the federal government. Though there have been some small fee increases for veterans covered by Tricare, the military health-insurance programme, significant cuts to veterans’ benefits are unlikely, and for good reason. Military pay is far from generous, and the benefits are comprehensive but hardly gold-plated or easy to navigate. Not for nothing is a popular online forum for veterans wending their way through the bureaucracy of the Department of Veterans Affairs (VA) called HadIt.com.

Still, even if services are not cut, they are unlikely to improve as steeply as they did in the last decade, when between 2003 and 2010 the VA’s budget more than doubled. Jeff Miller, who chairs the House Veterans Affairs Committee, says he and veterans’ organisations are “in a position of defence” against any potential cuts, and says he worries about the effects of the big and supposedly mandatory defence cuts occasioned by the supercommittee’s failure last month to reach agreement on the deficit. For the next year at least benefits are safe: the VA is funded two years in advance, and after a slight dip from 2010 to 2011, in 2012 its budget will increase.

But its costs are also rising. Despite the influx of young returning soldiers,America’s veteran population, like the general populace, is ageing and living longer: the number of veterans aged 85 or older is forecast to grow by 20% in the next decade. Improvements in military medicine have thankfully reduced mortality rates for soldiers injured inIraqandAfghanistanas compared with battlefield injuries in previous wars, but those soldiers often require specialised, long-term mental and physical care. The VA has done a lot to make access to its services easier, as of course it should, but this has resulted in rising numbers of claims. And then there is the problem of joblessness, which keeps unemployed veterans on VA health care rather than getting it from a private insurance programme offered by an employer, as most Americans do.

A wide array of government programmes have failed to get veterans back to work. The Post-9/11 GI Bill, signed into law by George Bush junior in 2008, has at least helped veterans go back to school: it pays for education and training for all veterans who served more than 90 days in the armed forces afterSeptember 11th 2001. Barack Obama created a Council on Veterans Employment in 2009, and the federal government hired over 70,000 veterans in both 2009 and 2010. On November 21st Mr Obama signed a bill offering tax credits to employers who hire unemployed or disabled veterans. Michelle Obama and Jill Biden, the vice-president’s wife and the stepmother of a soldier, have launched a campaign on behalf of veterans and military families. The Department of Labour offers an online employment service, as well as counselling for veterans at its 3,000 career centres dotted around the country.

Still, commissions, initiatives and incentives can only go so far. The transition from a regimented military life to the unstructured vastness of civilian life is difficult. Susan Hampton, who helps returning veterans at one such centre inCorbin,Kentucky, says that soldiers often have trouble translating their military skills into marketable civilian ones. Besides which, says Glenn Campbell, a Marine veteran who now helps match returning soldiers with employers and job openings in eastern Kentucky, “résumés scare a lot of people”—particularly soldiers, accustomed to being told where to go and what to do, and suddenly having to figure out, rather than being told, what employers want.

Over 2m soldiers served inIraqandAfghanistan. That may sound like a lot, but it accounts for less than 1% of Americans. Many soldiers return to find themselves the only people in their towns or communities who served. Jon Soltz, who spent the last year serving in Iraq as a major advising the Iraqi army and before that headed a left-leaning veterans-advocacy group called Votevets, went to the bank a couple of days after he returned home. He told the teller he no longer lived at the address on file, and had spent the last year inIraq. “She asked me if I was there on vacation…People aren’t going to understand. People aren’t living it. It was a chosen war, and the country was never really engaged in it.” Perhaps. But as unpopular as the war became, at least its opponents have not vented their anger at returning soldiers, as many did afterVietnam. As Mr Campbell notes, “veterans get more honour and respect than anybody” in his part of the world. And that is largely true elsewhere too: returning veterans do have a distracted nation’s gratitude. But gratitude alone never paid a bill.