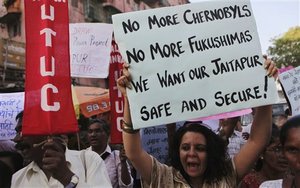 It seems that India is building the world’s biggest nuclear plant, in addition to its first nuclear submarine. No comment on the relevance of the latter program from the viewpoint of efforts to improve the lot of the Indian paupers, who did not disappear. However, the Indian economic might being now an established factor, it’s likely that the giant former possession of Britain will play a much larger role in the general area which includes the Indian Ocean on one hand, Afghanistan on the other.

In the latter country (which borders Pakistan rather than India) New Delhi has been a prudent player for a number of years. It is helping the Afghanis with programs such as road building and in less ambitious plans which are prevalently financed by the United States. Indian companies are involved in construction works for the new seat of the Afghan parliament. Of course such Indian activism arouses the resentment of the perennial rival, Pakistan.

American diplomatic sources believe that Islamabad will as a reply to India strengthen its ties with the Talibans and the Moslem militants in Kashmir. Recently Yusuf Raza Gilani, Pakistan’s prime minister, declared that New Delhi must reduce her role in Afghanistan and in the Pakistani province of Baluchistan if she wants to improve relations with Islamabad. The Indian involvement in the Afghan act may or may not grow larger; right now it’s not really heavy. One of the likely aims of New Delhi is contributing to  some improvement of the situation, as the country theoretically controlled by Kabul will be vital for getting natural gas from Central Asia.

While New Delhi seems currently reinforcing her ties with the United States, Pakistan is engaged in a rather bitter feud with Washington over the war missions of the American Predator (unmanned) drones on the tribal areas of Pakistan which border on Afghanistan. A recent report of the Pakistan’s Human Rights Commission states that in 2010 the drones  killed 957 civilians. A few days ago the head of Islamabad’s Intelligence met Leon Panetta, director of the American CIA, and allegedly stated that his government will restrict cooperation with the U.S. against terrorism if there will be no reduction in the drone attacks on Waziristan. As recently as April 13 one or more Predators killed six persons in South Waziristan. Of course the American drone attacks violate the sovereignty of Pakistan, in addition to killing human beings, many of whom are not involved in Taliban activities. The Islamabad minister of foreign affairs has strongly protested against the American war operations in Pakistan, which belie lofty professions.

On the other hand the American side does not conceal some resentment because of those Islamabad’s nuclear and defense programs which are supported by China. Such programs are said to include building two Chasma reactors in Pakistan and a joint JF17 attack plane. China too is supposed to be interested in a larger role in Afghanistan. A few days ago Yusuf Raza Gilani, Pakistan’s premier,  flew to Kabul on the invitation of president Karzai.