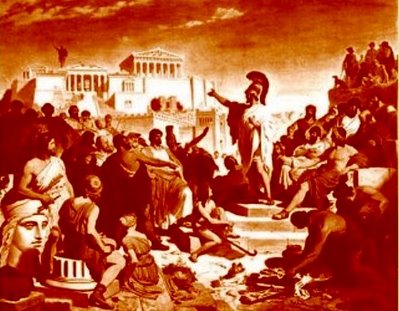 The hard truth is: in those advanced societies whose parliamentary/electoral mechanisms are long established , the immediate prospects of sortition are either next to nihil ,or very slight. The consensus still goes to passing sovereignty to elected, professional representatives. The technology to cancel such delegation to politicians is now available. It’s public psychology that lags.

Instead semi-direct democracy, either selective or not, is the intuitive alternative to both electoralism and autoritarian rule in countries that, in a definition of Oliver Dowlen, are “modern cases of extreme democratic breakdown”. If democratic breakdown is meant in a symbolic rather than strict way, then nations such as Italy, Spain, Portugal, Greece, Argentina, many additional Latin American republics are places where sortition has some mid-term opportunities.

In these cases, the proponents of change should assign first priority to showing the failures of electoral democracy rather than to defending the superiority of any particular version of direct democracy. Sectarian infighting among advocates of sortition is worse than wrong, is self-defeating. So it’s perhaps pertinent that we list a number of common argumentations on the senility of the electoral process and philosophy.

Traditional democracies cannot be participatory. Active participation requires the trust that participating is likely to produce results. Over time democracy has been degraded to rule by career politicians. They do what they want and hold the people in irrelevance. The government has become so arrogant and overwhelming that we lack real liberty. People have literally nothing to say about public affairs.

It is now possible to contact and involve huge numbers of citizens who do not have access to the communication resources traditionally possessed by the established mass parties. The high likelihood of interactive links in all homes in the Western societies enhances the prospects of some kind of direct democracy. Sortition promises to be a very efficient mechanism for the selection of deliberators and of operational officers.

It’s not logical nor admissible that, 14 years into the Third Millennium, the political process stays unchanged as it was in the18th century. When Thomas Jefferson was president of the United States the trip from Monticello, his estate in Virginia, to the White House took three days on horseback. In 1831 the federal employees were in the U.S. 11,491; today they are several millions. And Internet is able to turn any giant nation into the cyber-equivalent of the Greek city-state. Rather than propping up tyrants, Internet can totally empower the citizens.

Direct democracy should be each citizen personally controlling the government from his home through a secure interactive network. Instead partisan politics, special interests and money behind them and behind candidates excavate beneath popular sovereignty. It empties it. In fact, direct (also semi-direct) democracy should be eliminating professional politicians, partisan politics, corruption and the role of money.

The enemies of change are used to warn that direct democracy is a highway to despotism. But history and political science suggest that common man, given the right circumstances, can be rational and discerning enough.

A geological change has happened in Western politics- the dramatic obsolence of the traditional institutions: political parties, establishment media, parliaments, lesser assemblies. Technology makes it possible to bypass them. Traditional mechanisms were deliberately designed three centuries ago so that popular passions were filtered before they could become legislation. Additional filters were added. Most filters are now superannuated. The parties are moribund, Parliaments are ponds of stagnant water.

In 1992 James S.Fishkin, professor, Univ. of Texas, offered a scheme whereby randomly chosen citizens would be given the opportunity to deliberate. Fishkin proposed “a full-scale national random sample of 600 people gathered to a single site where they could question the presidential candidates”. In his opinion, that random sample would be a scientifically representative microcosm of citizens deliberating on issues. The precondition would of course be that a small group can be an accurate barometer of the public sentiment. Such a completely new form of semi-direct democracy supported by information technology would have randomly chosen average citizens doing the hard work of democracy that most of us don’t have the time, or will, or knowledge to do. It’s the way the jury system works. The 600 people could be described as a macro-jury, but the macrojury could be much larger, could be f.i. 600 thousand.

Twenty years ago, more or less, the American business magazine “Forbes” recapitulated: “Technology has rendered totally out of date the idea that authorities can control morality and culture. Politicians may still give speeches about everything noble, bur everyone knows that the talk is just reactionary gabble. The old political carnival, the old game of big promises on election day, soon forgotten in the enjoyment of power, is over”.

Futurologists Alvin and Heidi Toffler argued that “spectacular advances in communication technology open, for the first time, a mind-boggling array of possibilities for direct citizen participation in political decision-making. We the people must begin to shift from depending on representatives to representing ourselves”.

In conclusion, with most homes in advanced countries having a modem, the decline of the polling place is at hand. And when we can vote from home, it’s hard to believe that choosing candidates won’t be expanded to choosing politics.