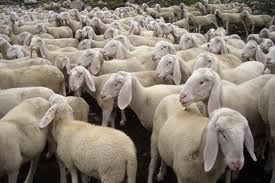 this is to recommend that we proclaim April 13 as Day of the Ovine Pride of Italy. In fact, beginning today, Italians may be admitted into the elite club of the well-known breeds such as Merino, Cotswold, Hampshire Down, Oxford Down, Shropshire et cet. In our ‘Stivale’ (the geographic shape of our Peninsula is a 17th century riding boot, stivale in our language) we have a number of glorious ruminating races such as Sarda, Abruzzese, Biellese, Bergamasca. But I feel that singling one or more sheepish stocks is a possible disservice to the remaining national races. Ovine Pride should not be the unjust domain of one section of the peninsular dwellers -all Italians are entitled to the self-esteem of being members of the sheepish Commonweal!

Why April 13 of all days of the Gregorian calendar? Because in said day the abiders of the Stivale confirmed beyond any possible doubt to be as bashful and as obedient to the herder as any sheep of the planet. How did they qualify for the dignity of first-class sheeps? The answer: on April 13 they read in their morning papers that 58 members of Parliament  proposed a law that would double the Treasury’s direct payments to political parties (=organized gangs of the Mob). While the chief proponent of the law is a former Marxist who used to head the financial department of the old Communist party,  supporters of both the government and the opposition subscribed the tentative law. Money unifies. Money glorifies political harmony.

Now, the fiscal health of the republic is presently so precarious (financial analysts frequently associate us to profligate nations such as Greece, Ireland or Portugal) that most expense budgets, both central and local, suffered heavy cuts. Teachers who assisted severely handicapped children lost their jobs. Support to scientific/technological researches were curtailed. Occasionally policemen buy gas for their cruisers with personal money. Untold schools, courts of justice, other public buildings cannot afford toilet paper. The country at large was told to accept sacrifices.

Professional politicians, on top of rejecting ANY  cut and of recently giving themselves big individual raises, are  striving to furtherly enrich their organizations with public funds. It’s universally known that the Italian politics is not only among the world’s most expensive ones because of corruption and illegal practices, but is also the one whose legal allowances are possibly the highest. This is why many believe that ours is a cleptocratic democracy.

While normal humans would be disgusted with such a situation, so they would be offended to the point of revolting, of hating their politicians, of at least denying them their (mostly irrelevant) votes, the two-footed sheeps of the Stivale will not be too indignant. No prospect of revolution, however mild. The only chance for said sheeps of evading the fraud of the 58 schemers will be the new law being withdrawn out of unforeseen timidity.

The burden of the Italian politics keeps growing steadily since 1945. A few years ago a national referendum forbade funding the parties with public money -at no avail. Legal payments to political bodies and to individual politicians go on growing larger. This would be terribly resented if the dwellers were ordinary members of the human race. But as proud sheeps of the best breeds, we Italians go on grazing -unscathed, benevolently herded by the Mob.