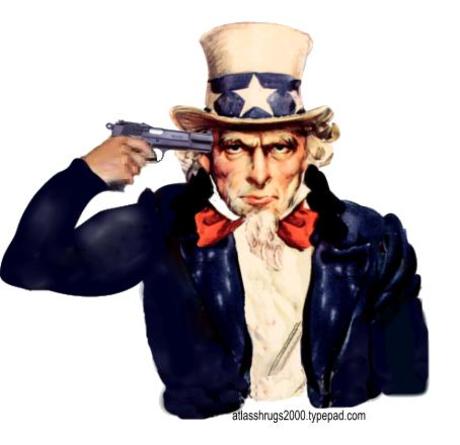 The Republican Party is risking the financial health of the United States, and what recovery the country has made since the 2008 (Republican-made) economic crisis, in order to fight national health care in general and “Obamacare” in particular. So fanatical, so anti-rational, so ideological are these Republicans, that even risking the financial rating of their own country, and its further economic stability, take a back-seat to their “all government is bad government” Tea Party ideology.

Republicans are acting like financial terrorists—willing to destroy the country’s credit and economic health for the sake of their anti-government ideology (ie, government for the poor), failing to recognize that the Affordable Health Care Act is already law, having been passed by Congress and upheld by the Supreme Court. So when house representatives, with support from Republican senators fail to honor law, they undermine democracy. The kind of government envisioned by Washington, Franklin, Jefferson, Madison, Adams and others—for which they risked their possessions, their names, their honor, and their lives—that government “of the people, by the people, and for the people” as Lincoln wrote, is then effectively a dead letter.

Let’s review first the Republican mantra that national health care is “socialism”. If you should travel to other countries, you would see that it is simply not true. I have lived abroad, East and West, and every modern industrial nation—except the US—has (affordable) health care for all its citizens and not just for the wealthy. “Socialism” is a bogey man used by rich Republicans to frighten ill-educated masses with. “Affordable” is the key term here. A country whose citizens cannot be healthy because health care is beyond their financial means is a demonstrably weak country. And in any event, Republicans cannot win on this issue. Public opinion is not with them, so they must somehow try to emerge from this crisis without looking like the malevolent politicians they in truth are. If ever one had doubts about how patriotic these Republicans are, doubt no more. Patriotism is held hostage to ideology.

But on a deeper level, let us never forget: History judges nations on how it treats all of it citizens, especially its weakest and most vulnerable. The Republican Party is today the Supremacist party: everything for the richest 10% and little or nothing for the bottom 80%. This dogfight over Obamacare must be seen as but one act in this drama, albeit a particularly dangerous one, with our country’s economic and financial health  hanging in the balance. All rhetoric aside (“socialism” and the like), it boils down to this: Is America for all Americans or only for rich Republicans? As Americans decide on this fundamental issue, so goes the fate of America—and democracy.