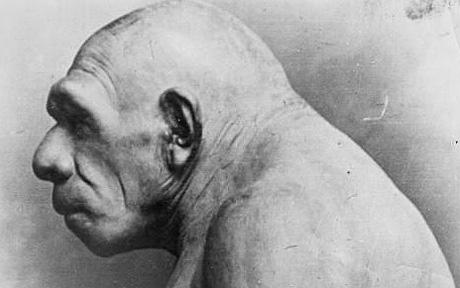 “At every crossway on the road that leads to the future, each progressive spirit is opposed by a thousand men appointed to guard the past.” (Maeterlinck)

It is absolutely stunning that in the 21st century we have people who hold great power, many of whom also aspire to the highest office in the land, who are themselves intellectual, spiritual and moral throwbacks to the Wooly Mammoths and Neanderthals. To use another image, they are “flat-earthers;” and no amount of science is able to get them to see the earth as a “sphere rushing through space around the sun.” For them the earth is flat, the sun travels around the earth, and the earth is 5000 years old—and nothing, least of all science, can change a “flat-earther’s” mind!

Armed with an amendment sponsored by Republican Rep. Max Teeters, the Wyoming Republican Governor Matt Mead has just signed into law  a bill that prohibits state funding for the Next Generation of Science Standards (NGSS)—an attempt by states to have uniform science standards nation-wide—because it accepts as facts both human-induced global warming and evolution. Does one weep—or laugh hysterically? Or perhaps both: first laughter at such insanity, then tears over such implacable, ideological ignorance as not even a lunatic would rejoice in. It is shameful beyond all reckoning, and shows just how ignorant and benighted are Republicans who hold political office.

Opposition to human-induced climate change has come from ( inter alia) the coal, auto, and oil industries, which have given hundreds of millions of dollars to fight controls on greenhouse gas emissions by secretly funneling money (for example) through (Republican) Think Tanks and other conservative organizations so as to give, deceptively, the appearance of intellectual inquiry, rigor, and debate on this issue. But it is all an elaborate charade. Yet again we witness how the wealthy and corporations diabolically influence public opinion in order to further their single-minded goal of unlimited profit and power—and the public weal, indeed the entire globe—be damned.

The NRA wrote and lobbied for and pushed through, thanks to overwhelming support by Republicans, a bill allowing guns on college campuses in Colorado. Never mind that unanimous opposition exists among police chiefs, professors, college presidents, and others directly affected by this bill. The NRA made sure that the bill, in the House, would pass over any and all objections. That’s what deep-pockets buy—unhindered influence. And that why lobbying as a source of influence, and the NRA, which uses lobbying to push it narrow objectives while ignoring the larger issue of public safety, are together America’s Public Enemy No. One.

The Right-wing speaks of “big government” and how it is taking over control of our lives. But the truth is, it’s big corporations, and organizations like the NRA, The (Right-wing) Enterprise Institute, and other ideological, conservative groups, that increasingly threaten the safety, health, and welfare of both our individual and communal lives—whose sole purpose is to increase corporate wealth and power.

Corporations far outstrip the government in reach and power, and thus are the real threat to our constitutional way of life—indeed, the danger of big government, by comparison, pales into insignificance. When year after year, now, the weather has become more bizarre and fantastically dangerous, not just in the US, either, but around the globe; and every credible scientific community unanimously cites human-caused greenhouse gases as the culprit—the super-rich and corporations still refuse to acknowledge the evidence because it would mean added costs on their part to lower such human-caused greenhouse gases. Forget what’s good for America or for the world; money is all their god—which is exactly why they are so dangerous.

If America is to move forward—and not backward; if it is to enter the 20th century (let alone the 21st) and provide affordable, and multiple, mass transportation systems for the whole nation (as ALL other industrialized nations have); if it is to stop human-caused greenhouse gases, and instead develop safe, renewable and sustainable sources of energy (and to hell with the auto/oil/gas/coal industries self-interested opposition); if  we are to have sane gun laws that make our nation safer rather than more dangerous (and to hell with the devilish NRA); if we are to focus once again on family, church, local (well-paying) jobs, education, and a rich and varied local communal life where small is decidedly better (and to hell with globalization, and bigness, and “made in China”—if we are to do these commonsensical things, then our great nation may once again thrive; but if we do not, it will surely die—slowly, painfully, and tragically.