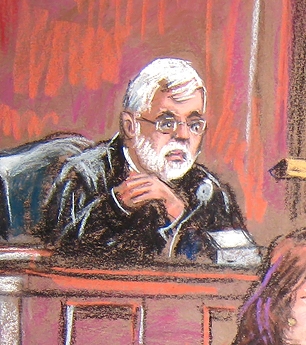 The  American public, I’m afraid, is very punitive. We have more people in prison on a per-capita basis than any country in the world by a very substantial margin: well over 2 million. When someone does wrong, something deep in the American character says, ‘Send him away forever’. (That probably explains our historic love for the death penalty. In 2002 Rakoff unsuccessfully declared the federal death penalty unconstitutional).

There is a strong moral streak in American culture. That can be good. I haven’t been shy in my own opinions about expressing moral outrage when I thought it was called for. But there is a danger of that being transmuted into a kind of lynch-mob psychology.

Under federal law I’m required to take account of the personal history and character of the defendant. There are defendants who are good people who have nevertheless done some bad things. I’m not interested at all in people who make charitable contributions, but I am interested in where people have spent their time doing good.  And I’ve given white-collar defendants 20 years, like Marc Dreier, a Manhattan lawyer convicted in 2009 of a scheme to defraud investors of $700 million. I found very little that was redeeming in his character.

The kind of person who receive my sympathy has shown by his acts that he cares about his fellow man and who has acted honorably for maybe 99% of his life and then makes a mistake. Mr Dreier did contribute to charities, but that wasn’t the nature of the man.

There is a tendency, not wholly irrational, to say: ‘Well, because he is at the pinnacle of business, and because these are difficult cases to make, we ought to string him up’.  China carries this to the extreme, with the death penalty for 66 crimes. They impose the death penalty on somethig like 10,000 people each year. If deterrance is the whole ball game, we should have the death penalty  for exceeding the speed limit by 10 miles an hour.