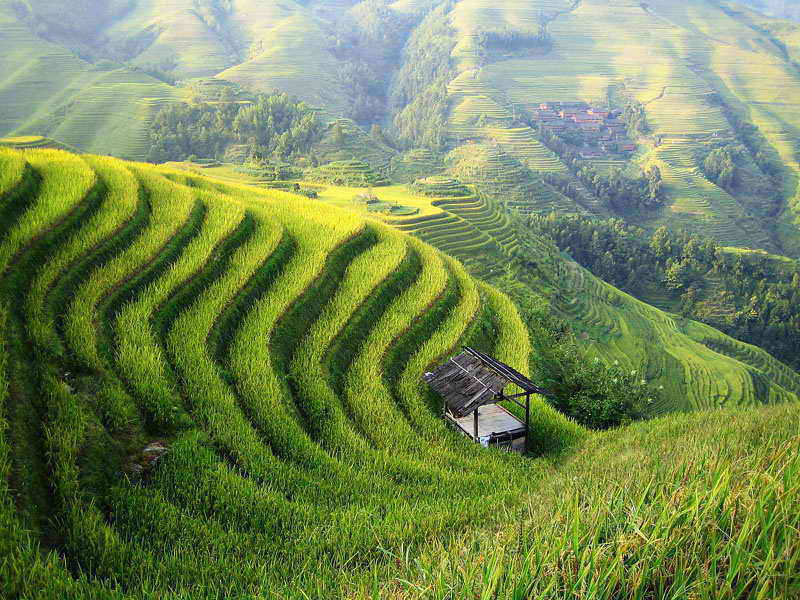 “China has 19% of the world’s population but just 7% of its farmland. The country has lost more than 20 million acres of arable land since the mid-1990s. The good news is that China has made remarkable progress toward feeding itself in the last 30 years. The central government spent $71 billion on agriculture in 2008; that number soared to $164 billion in 2011. One result of these investments is that China is now the world’s largest agricultural producer; and is the first developing country to meet the UN Millenium Development Goal of cutting in half the number of people living in extreme poverty and hunger by 2015. The nutritional intake of the average Chinese continues to improve, to about the same as the average American.

“The challenges are plentiful. China needs to ensure that the food is affordable for all, and that an increasingly affluent population gets the proper nutrition. Well-publicized cases of tainted food have raised concerns about food safety and waste. To address these concerns, China has sought out the best available science and know-how through partnerships with companies including DuPont and others. Even as productivity increases, food safety remains an essential part of food security.

“With the UN estimating recently that 870 million people around the world go hungry, success in China can serve as a model for many other countries. One single example of a scientific innovation with a broader payoff emerged when DuPont Nutrition and Health tackled the problem of popular yogurt drinks that could not always be kept cold during distribution. The company developed Yo-Mix, yogurt cultures that resists further acidification even at room temperature. Immensely successful in China, the product is now sold globally.  Innovation in China promises to have world impact. Indeed China’s transition from recurring hunger to a food security showcase is a model for global change”.

Sapphire Energy has built the world’s first large-scale farm to grow algae and produce crude oil. Algal oil has the potential ‘ to change the world’ because any nation will be able to produce oil.  Productive and versatile creatures, algae grow fast, don’t need to be fed and build up oil in their cells after being exposed to sunlight and CO2. They like salty or brackish water, so ponds can be built on cheap land where not much else will grow. Into each pond go genetically engineered single-cell algae that grow to maturity in about 5 days, after which they are skimmed from the water and put through a thermo-chemical “wet extraction” process to separate the oil. The company plans to make about 100 barrel of oil a day in New Mexico. If all goes according to plan, commercial production of perhaps 10,000 barrels a day will begin in 2018. Alas, no company can make algal oil at a cost that enables it to compete with conventional petroleum-yet.

On the world’s largest fir-tree farm

Holiday Tree Farms is the largest Christmas-tree producer on earth.M Beginning in late October, Holiday’s staff swells from about 250 employees to 700 working 16-hour shifts. They will fan out across the company’s 8,500 acres, while about a half-dozen helicopters crisscross the sky, each hauling 15 trees per load to processing centers. By mid-December the company has cut and transported 1 million trees. After a certain date, the product is completely worthless.

The company (which is private) grossed $25 million in 2011. Each year Holiday plants more than 1 million two-year old seedlings. After two years, workers prune the trees once a year, shaping them into that perfect cone. The company is now growing more of  ‘table-top trees’. There’s been a bigger demand for two- to four-footers. They say it’s the bad economy. Perhaps it’s a baby boomer thing. That generation is getting too old to deal with a big tree.

The driverless revolution, by Brian Dumaine

Google has now proved that a self-driving car can travel more than 300,000 miles without a mishap. Its customized Toyota Priuses use an impressive combination of GPS, radar, and a 3-D mapping camera on the car’s roof that ‘sees’ traffic signals, road lanes, and pedestrians in real time. In 2010 four driverless electric vans made the 8,077 miles drive from Parma, Italy, to the World Expo in Shanghai. Last October  California became the third state, after Nevada and Florida, to make self­-driving vehicles street legal. (The catch, for now, is that a human must sit in the driver’s seat, ready to take over in an emergency). Nissan revealed a self-driving prototype. GM, Ford, Toyota, and BMW are experimenting with similar models. In 10 or 15 years you’ll see a lot more of there cars.  These vehicles could also help boost fuel efficiency. For instance, GPS could identify empty parking spaces. In congested urban areas, about 40% of total gasoline use is in cars looking for parking.

The average American commuter now spends 250 hours a year behind the wheel of a vehicle. What if those hours were spent answering e-mails? The technology could be a boon to the trucking industry. Picture long lines of self-driving 18-wheelers, 12 inches apart, speeding down a special lane on the Interstate at 100 mph. Self-driving trucks would boost fuel efficiency by 15% to 20%. No drivers, no stops for fuel and food, and no one sleeping overnight in the cab with the air conditioning running. In remote areas mining companies can use giant trucks carrying tons of ore without an operator at the seat. In Western Australia the mining giant Rio Tinto saves as much as $100,000 a year per truck of exactly this kind.