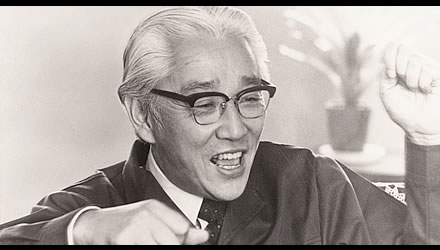 I once complained to an American friend that it was becoming difficult to find anything actually made in theU.S.these days, and he said, “Why don’t you take some of our lawyers, a genuine Made- in-America product!” We both laughed over the joke, but it isn’t really funny. The lawyer has become in my mind a major symbol both of the difference between American and Japanese business and management styles and of a weakness in the American system. I have spoken out frankly on the subject of lawyers in speeches in many places in theU.S., including Harvard.

Americans know that legal problems are constantly involved in almost all of the relations between individual companies or between companies and the government and its agencies. Americans seem to take it in stride, but I can’t. American businessmen seem to think it is natural always to be looking over their shoulders to see who is coming up behind them with a lawsuit. The intrusion of lawyers and the legal mentality into so many facets of American business is in contrast to Japanese management style and philosophy. I  hope we do not go the way of the Americans in this regard.

Other businessmen have been worried about the problems that lawyers create for business and for American society generally. My friend John Opel of IBM wrote an article a few years ago titled “Our Litigious Society”, so I knew that I was not alone in my view that lawyers and litigation have become severe handicaps. In some cases lawyers step in when there is a traffic accident and sometimes take 65% of the insurance money or the court award, leaving only 35% to the victim.

There are over 500,000 layers in theUnited States, and I understand that every year more than 39,000 people pass the bar examinations. InJapanwe have approximately 17,000 lawyers, and the number grows only by about three hundred persons a year. The bar examination is so difficult that less than 3% of those who take it pass it. InJapanwe have no huge law firms as in theU.S., where dozen of lawyers’ names cover the front door -sometimes the front wall.

While theUnited Stateshas been busy creating lawyers, we have been busier creating engineers. We have twice engineering graduates, which means, taking the relative size of our countries, four times the ratio of engineers. In the electronics field alone, each year we graduate about 24,000 engineers, to about 17,000 in theU.S.

If we listen too much to lawyers, we cannot do any business. Sometimes nonsensical lawsuits are generated by lawyers. Contingency cases, which are frowned upon inJapan, are common in theU.S.The chairman of Electrolux, Hans Werthen, told me that if he settled a case with Sony without his lawyer’s OK, he might be sued by his own lawyer! Worse, in my opinion, is that nobody seems to trust anybody in the legalistic climate of theU.S.InJapanwe customarily trust each other, which is why government and industry have managed to get along so well since the war.

American companies use the law to harass and actually block Japanese imports. They spent millions of dollars in the legal battles, but they failed to make themselves more competitive against the Japanese makers.

After the war, both the labor law reforms and the destruction of the family-controlled holdings   were major contributors toJapan’s reconstruction. We also devised a union system in which the company family became the labor union rather than the impersonal industry-wide kind of unions that finally developed in theU.S.We have labor peace inJapanmainly because management do not use labor as a tool and tries to be aware of the concerns of labor.

In Parisnot so long ago, someone said rather innocently to me that Japanis a capitalistic country. I said that actually, it would be more accurate to say Japan has a socialistic and egalitarian free economic system.

The old style of management that is still being practiced by many companies in theUSand by some inJapanis based on the idea that the company that is successful is the one that can produce the conventional product most efficiently at cheaper cost. Efficiency, in this system becomes a god. Ultimately, it means that machinery is everything, and the ideal factory is a perfectly automated one, perhaps one that is unmanned. This machinelike management is a management of dehumanization. But today, management must be able to establish new business ahead of its competitors, rather than pursue higher efficiency in manufacturing conventional products. In theU.S.andEuropetoday, old-fashioned low-level jobs are protected while the new technologies are being neglected.

The company must not throw money away on huge bonuses for executives or other frivolities but must share its fate with the workers. Japanese workers seem to feel better about themselves if they get raises as they age, on an expectable curve.

When crises hit various industries, such as after the oil shocks of 1973 and 1979, Japanese companies showed flexibility. Shipbuilding companies began to manufacture antipollution equipment, computer software, even dishwashers. A mining company began to make bowling machines. A textile company, Kaneba, started making cosmetics and is now a major factor in the local market. When movie attendance declined, a Japanese studio started a leisure industry using its movie theater properties.

More recently, with the fall in world demand for steel, steel makers, already the most efficient in the world, have begun to sell their byproduct gases, such as carbon monoxide and hydrogen, to chemical companies as feedstock, which also lessened the chemical companies’ reliance on petroleum. Now there is lively competition among Japanese steel makers in marketing these gases. In another recent example, a Japanese steel company joined with an American semiconductor maker to produce silicon wafers for making masterslices for semiconductor gate arrays and very large-scale integrations for telecommunications circuits. This was the first case of a steel maker entering the market for semicustom logic chips. The steel company’s experience as an efficient producer of small-batch customized steel products, using computerized production control and quality assurance systems, seems to make a fine fit with the American manufacturer. Both companies will learn from this experience, and especially the employees of the Japanese firm, who will be looking into the future having had the experience of working in a shrinking industry.

Such corporate moves make more sense to me, as a Japanese manager, than some I have seen in the U.S. Americans pride themselves on being rational in their business judgments: the total logic of the American business schools seems to be cold, deemphasizing the human element. We inJapansee the bases for success in business and industry differently. We believe that if you want high efficiency and productivity, a close cordial relationship with your employees, which leads to high morale, is necessary. Sometimes it is more important to generate a sense of affinity than anything else, and sometimes you must make decisions that are, technically, irrational.

You can be totally rational with a machine. But if you work with people, sometimes logic often has to take a backseat to understanding.