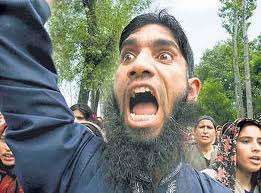 With flames of revolution raising high in the skies of the Arab (or Moslem?) universe, we can only contemn the interpretation “populations are struggling for democracy and civil/human rights”. Those populations hate their despicable despots, yes. They will enjoy ‘liberation’ (whatever liberation will mean), of course.

But too many millions have no prospect of work. They know too many facts of corruption, oppression and illegality in public life. They are conscious of too much distance from the lot of the proletarians and the one of the priviledged, including the siblings of people in authority. Probably the majority of revolutionaries would go back to docility, should they be offered a job. Democracy alone promises nothing to them.

But do we risk overestimating the importance of the Islamist factor? We do, in part. Perhaps a great many protesters would not expect to get an income, should fundamentalism triumph. So let’s be cautious in searching for religious motivations. On the other hand, Islam is not religion only. It is a cultural identity and a civilization, is a vast and proud ‘nation’, is the memory of an empire and the longing for revenge. In addition, fundamentalists have historically demonstrated their capacity to meet the basic needs of common people, in many ways. While the prospect of more democracy, more parties, more robber politicians will not impel to rebellion, a great many hungry people will expect something for them from ‘a call to arms’ of their religious leaders or propagandists. A tenet of their faith is social justice, while secularism and modernization announces almost nothing in terms of real, weighty solidarity with the proletarians.

In such a sense any fundamentalist mobilization is, or can be, more relevant than all efforts to conquer minds and hearts to the precepts of the Western political science -free elections. decent parliaments, the approbation of Western diplomats, presidents and media. Daily bread, not democracy or modernity, is the paramount aspiration of most Egyptians, Tunisians, Syrians, Sudaneses, Saudi Arabians, Yemenites, Afghanis and other Moslems.

The clash between secularism and fundamentalism is long a reality of the modern Islam, even in non Arab (or not entirely Arab) contexts as Nigeria or Sudan.The panislamist drive was born in the XIX century as a counteroffensive against the Western colonialism that had subjugated most Moslem countries. Such counteroffensive had several prophets, theorists and leaders. They advanced a variety of doctrines and battle cries. In the Arabian peninsula Muhammad Ibn Abd al-Wahhb (1703-92) preached a very strict adherence to the traditional faith, a one which the Saudi dinasty later adopted. In Afghanistan an intellectual/politician who acquired a large following under the name Jamal al-Din Afghani (but he was born in Persia) became the champion of a Moslem revenge. Egypt is the cradle of the Moslem Brotherhood. Its founder was Hassan ibn Ahmad al- Banna. Born in 1906, he was killed in 1949. A disciple of his, Sayyid Qutb, wrote in a book that social justice had to be the basis and essence of any future Moslem nation. The Nasserist regime executed Qutb for subversive acts (but he was no terrorist). Presently the Brotherwood is the single well organized movement in Egypt. In 1981 an Islamic extremist killed the Egyptian president Anwar es-Sadat, who had signed a peace agreement with Israel.

In eastern Sudan sheikh Muhammad Ahmed proclaimed himself the Mahdi (savior), organized a state and an army that in 1885 defeated the British troops, killed their commander, general Charles George Gordon, and conquered Khartum. Movements and efforts somewhat connected with religious revival, also several jihads, arose in several countries of Africa and the Middle East. In Asia of course large nations such Pakistan and Iran were the products of the Islamic fundamentalism. Today the haters of Islamism are afraid that Egypt will become another theocratic Iran.

We have seen that Moslem thinkers and leaders have consistently emphasized that social justice is the basis and the heart of the faith. Therefore we can expect that fundamentalism will succeed in amalgamating with the revolutionary waves of today. By promising new, untried ways to better the condition of the vast masses of poor believers, fundamentalism might win the political victories that proved impossible in the past three centuries. Such eventual victories will probably be the result of a combination of forces -political, social, cultural, religious ones. Given the right circumstances, Islamism could even join its arch-enemy, westernization/modernization. Reactionary elements are not absent in pan-islamism, but even they may combine with adversaries in order to demolish or weaken the present structure of most Moslem societies.