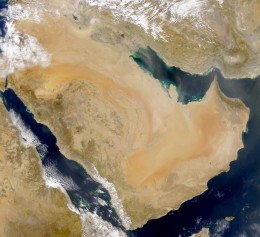 Recently the Saudi government in Riyad placed an order for planes, helicopters and other weapons which possibly was the largest single war contract in peacetime. A shame indeed, when the Saudi armed forces are already well equipped for killing purposes beyond any probable need. That government has enemies, yes, beginning with Al Qaeda. But the latter are enemies that conventional warfare does not destroy nor deter. Certainly you and I would think of different, more civilized ways to spend the dollars coming from oilfields which represent 25% of all known reserves of the planet.

Anyway our present theme is not moralizing about the ethical choices of Riyad. Our theme is some strangely unknown features of the Arabian modern reality. We now find it natural that the Arab monarchies are very rich. But as recently as the Thirties of last century the major wealth of the Saudi economy was fishing natural pearls; and the largest receipt of the Riyad treasury was the taxes pilgrims paid to enter Mecca and Medina. Pearl fishing was cruel- most persons engaged in it died younger because of the stress of diving for natural pearls. Today the Saudi king collects enormous royalties and fees from the oil/gas industry.

The predominantly arid peninsula is now inhabited by more than 60 million people. Qatar, 1,4 millions, numbered 30,000 sixty years ago. This means that oil and a thunderous modernization has attracted so many immigrants as to provoke imbalances and distortions. Gulf emirates whose populations were tiny, today may have non-native majorities. Societies have formed where at bottom Indians and Sri Lankans are house servants and manual laborers; above them a middle class of educated Indians and Arabs works in offices and technical jobs. The top stratum of foreigners is made of Palestinians, Lebaneses and Western expatriates. The native Arabs share the oil bonanza in a number of ways: they do not pay taxes, are compensated by foreigners to act as their partners or legal ‘sponsors’ -foreigners are not allowed to own firms and houses. In addition there are jobs, state loans and outright gifts which can only go to natives. Many young Arabs do not feel compelled to find employment.

The sudden wealth and some over-ambitious modernization programs have generated mistakes. In Dubai, formerly a small gulf port, oilfields are now empty, so the emirate had converted into a giant financial and tourist center. In 2009 the international crisis and the consequences of a property bubble forced Dubai to ask the help of Abu Dhabi, where modernization had been wiser.

Oil was discovered in Saudi Arabia in 1932, the year when the kingdom came into existance. We know that before oil the Arab peninsula was poor. It wasn’t always so in the remote past. Kingdoms and principalities of the South were the legendary producers of spices: aromatic, very valued vegetable productions used in religious rites, cookery, medicine. In the south-western hill country native plants grow whose resins give frankincense and myrrh. The local princes (one of them was the Queen of Sheba of the Bible) also monopolized the trade from India and other Asian spice-producing countries to the Mediterranean.

Out of the three historical great sections of the 3 million sq.km. Peninsula -Arabia Petrea to the North, Desert Arabia in the center, Arabia Felix in the South- the third one was (comparatively) green and fertile in spices. Now divided in two states, Yemen ( including Hadramouth) and Oman, Arabia Felix saw around 500 a.C. an episode of Christian domination (of the Abyssinians from Axum) and another one of Hebrew influence. Central Arabia was of course the origin and nucleus of Islam: from there Mohammed preached and acted to create a world faith and a great empire. Internecine conflict soon erupted between factions, so the highest authority of Islam abandoned Mecca, the birthplace of Mohammed. The caliphs of Damascus and Bagdhad plus other leaders competed to guide Islam. In 1517 the whole of Arabia fell to the Ottomans. Three centuries later Great Britain conquered Aden and most coastal territories; only Yemen remained independent.

Today the king in Riyad, while remaining a feudal sovereign, is the foremost protagonist both in the modernization of the peninsular society and in repelling the political/terrorist attack of adversaries such as Al Qaeda. The latter is said to maintain an operational basis in Yemen.

Why have we dealt with Arabia, a small ‘continent’ which is usually ignored when oil is not involved? Because long depressed Arabia might find a role in the geopolitics and, more importantly, in the future evolution of wide sections of the globe. An experiment is going on in the peninsula, one that may both fail and succeed: grafting an almost futuristic modernity into a very old tree. Some traits of modernization are frightful, such as the golden sanitaries and precious plumbings of the seven star hotel in Dubai, the yachts as big as ships, other marks of unbridled consumerism of many former dromedary and goat shepherds.

However, who can say? With her northern shores on the Mediterranean, Arabia is the homeland of the entire race of the descendants of Shem, now chiefly represented by Jews and Arabs, but in ancient times including the Babylonians, Assyrians, Phoenicians, et cet. Arabia generated, in addition to three world religions and unsurpassed civilizations, a large empire. Notwithstanding present deformed, adulterated cultural circumstances, Arabia could possibly go back to enriching the Family of Man.