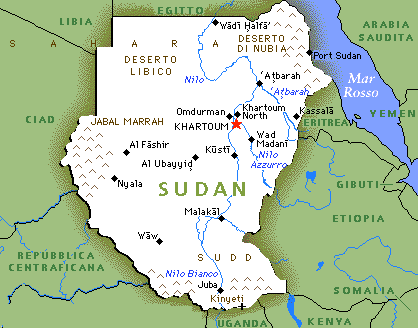 I have been listening to an African Catholic bishop narrating the modern occurrences of his country, Sudan. The very tall, forceful prelate, 60 or so, was describing the last two civil wars of Sudan with remarkable restraint, but since 1975 three and half million people lost their life. He did not really inveigh against Islamic fundamentalists, although they are there the harsh adversaries of Christians. He never mentioned Omar el Bashir, the Sudanese president whom the international Penal Court indicted for extremely grave crimes (Bashir is not universally condemned -a number of observers defend him).

So much moderation was the reason why I listened to the bishop with additional respect. Besides, if it’s written in Destiny that the Black Continent is going to have a better future, Sudan will be in the forefront of the future. Since many years its agricultural potential is estimated huge. It is already an important producer of cotton, peanuts, sugar cane, sesame. The semisocialist regime of progressive officers nationalized and developed the very fertile, Nile irrigated plains of the Northern region.

Sudan gravitated on Egypt along the millennia, and even gave a few pharaos to the Nile kingdom. Approximately two centuries ago the Egyptian sovereign, kedivé Mehmet Ali, perfected the conquest of the country and in 1823 built a capital, Khartum, at the confluence of the two Niles, Blue and White. When Egypy fell to the British, Sudan shared the fate.

But Sudan was the headstream of the Muslim revivalism and of several jiads (holy wars) in the 19th century. More exactly, it was in the second half of the 18th century that Othman dan Fodio succeeded in establishing a sort of caliphate in West Sudan. The Fodio caliphate even appeared robust enough to stop the British colonial expansion in the immense subsaharian space. In 1848 sheik Muhammad Ahmed proclaimed himself the Mahdi, the Saviour, and in 1885 his jihad defeated British general Gordon Pasha (who was slain when Khartum was conquered by the army of the Mahdi). General Kitchener vindicated Gordon in 1898. From that moment Sudan belonged to the Egyptian-British condominium. In 1956 Sudan obtained independence from Gamal Abdel Nasser.

The new nation, immediately controlled by the military class, was and is predominantly Arab and Moslem in the North; black, animist and partially Christian in the South where our bishop sits. The South has been rebellious since 1956. In 1991, when Khartum proclaimed the law of Islam, the situation of the Sudanese Catholics became extremely difficult. Missionaries were expelled and the ranks of the local Church forcibly reduced. But the Church was resilient: today there are nine Catholic dioceses and the faithfuls became more numerous. So when our Bishop announces rather emphatically that the important referendum of January 11, 2011 will probably give independence to the South, ending its multisecular subservience to the North, he speaks from knowledge and authority.

The natural objection is of course that a new sovereign state is likely to be the bane of common people. New officialdom, new burocracies, new superfluous diplomacy, new defense establishment, i.e. perpetuation of poverty and injustice. Then nobody can be sure that the bloody strife will cease simply because the independentist Blacks and Christians might win a referendum.

But who can say. Positive quirks of History are always possible. Among other things, China is increasingly involving herself in the rise of Africa as a source of raw materials, as a market, as a partner in civilization. Maybe the South Sudanese will learn from China rather than from the former colonial masters. Most African republics imitated the Western ways, and the results were far from good.

Then oil was discovered in the South. This can work both ways, giving impetus to a new State or to its enemies: will the nilotic giant gently renounce to oil?